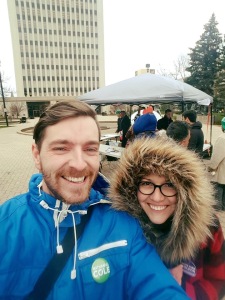 Voters will choose education trustees province-wide on Oct. 26. Regina’s public school board election is noteworthy for some energetic young candidates seeking to bring a new generation’s perspectives forward – a departure from a board often populated by long time incumbents and their anointed heirs.

NATHANIAL COLE is campaigning hard in Subdivision 3, which now includes Connaught and Davin schools. RealRenewal members may remember Cole as someone who challenged the board’s position on P3 funding in 2015, helping successfully push for a public meeting with SaskBuilds to discuss the new school builds. Since then, he has continued and expanded his interests in education issues, particularly around inclusive education. His primary opponent is Adam Hicks, the candidate endorsed by past trustee Dale West. While trustee, West helped push forward the closure and quick sale of Athabasca school, and was known for aggressively berating parents who questioned board decisions, not the best mentor for Hick’s platform of listening to parents.

TARA MOLSON, a child and family advocate at the YWCA, is running in Subdivision 5, on a platform that includes more welcoming, safer spaces for all children. Among other activities, she opened a literacy program at Albert Community School and oversees 20 YWCA after school programs.  She is opposed by a small business operator, Richard Gallagher, and Tanya Foster, a former Regina Christian School teacher, ardent evangelical Christian, and prolific pro-Sask Party re-tweeter, who is connected to board chair Katherine Gagne’s Harvest City church community. She is a full-time senior policy advisor for the Wall government but identifies herself in campaign material as an English teacher, being a part-time U of R sessional instructor on the side.

MISTY LONGMAN is running in Subdivision 4, with a focus on the success of First Nations students. Many know Ms. Longman as a welcoming face at the Aboriginal Student Centre at the University of Regina. She has a degree in business administration from FNUniv, and a Master’s in Science in Higher Learning. She is running against incumbent Cindy Anderson, who is seeking her third trustee term.

Some issues to watch

Board Transparency: In recent years, closed session has become the norm for nearly any item of public interest at Regina Public meetings, and written summaries of closed sessions have disappeared.  Read more

Student Support: Since 2007, Regina Public has acted as a vanguard for the Ministry of Education’s plan to phase out font-line education assistants who work with intensive needs students. Today EA cuts are continuing around the province, despite parents’ protests. Read more

Provincial funding: Underfunding and offloading teacher salary increases to local school boards makes it increasingly difficult to meet student needs. Challenging the underlying source of budget woes hasn’t been Regina Public’s strong suit, compared to other school divisions, and the chair has often been quick to publicly defend the government on moves like the heavy-handed imposition of P3 funding models and military training. Read more

Lunchroom supervision: In 2016 Regina Public Schools announced it will phase out universal lunchroom supervision, despite an earlier study they conducted that found board-funded lunchrooms were needed “to provide equity across the system.” Read more

First Nations & Metis education: The board’s primary focus is on rigidly-interpreted grad rates and achievement scores (overlooking other student successes), with declining attention to community issues and concerns. To this end, the board has bought into a packaged plan from New Zealand that was withdrawn by the NZ ministry of education after high-priced consultants failed to show improvements for Maori children. Read more

Environmental education: The innovative Trek School outdoor experiential learning program was dismantled at the same time new industry-friendly training programs were being put in place. There are a number of other enriching environmental/outdoor education programs available for students, but they are for the most part underutilized and supported in Regina’s public schools. Read more

Community Schools: Though ‘community schools’ exist as popular buzzwords, in reality the school board has phased out Community School Coordinators, reduced funding to School Community Councils, and tightened controls over what they claim SCCs can and cannot comment on publicly. Read more

School size: In 2009, in the midst of school closures, RealRenewal presented some its research to the board warning of a coming enrolment boom, only to be accused of exaggerating and spreading false information. Today overly, large schools have become the norm, and the value of smaller neighbourhood schools remains under-appreciated. Read more

The Subdivisions highlighted above stand out from what is otherwise a run-of-the-mill board election. Two candidates will be acclaimed due to lack of competition, incumbent Jane Ekong in Subdivision 1, and Jay Kaperski, a Normanview West community association board member, in Subdivision 7. In Subdivision 2, the choice lies between incumbent Aleana Young, who has consistently failed to support RealRenewal on key issues, and Elaine Caswell, a former education administrator for both the board and the ministry. In Subdivision 6, Nischal Baghi, an IT specialist who wants to encourage students to pursue higher education, is the sole candidate working to defeat chair Katherine Gagne.

Catholic School supporters do not vote by subdivision but choose from a list of candidates city-wide.